I just ran into something on Quora (interesting place) that I had to respond to. I have removed the names to protect the innocent (guilty?). Also, I'm doing it here, rather in Quora. Why? It is from a discussion that started many moons ago. Yet, it is still of interest. 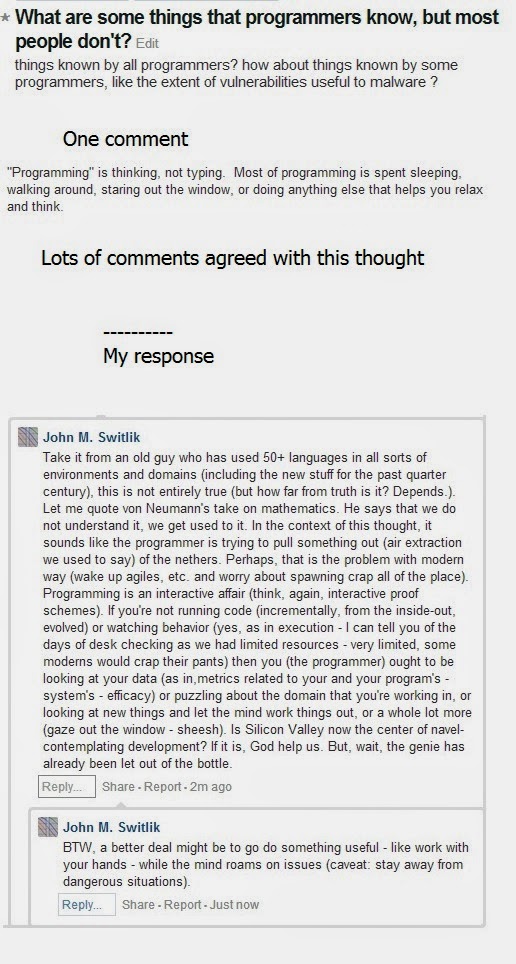 As you see, the question is: What are some of the things that programmers know, but most people don't? One comment says: sleeping, walking around, staring out the window, ...

Guess what? All sorts of people agreed with this. My response is shown.

Perhaps, rather than belabor the modern youthful view, I ought to remind them of the peripatetic's usefulness.

One could think of a lot of ways to get the mind to work than playing/lounging around. Is there some correlation with this type of thinking and all of the issues related to software (ah, let us count the ways?)?

But, the more interesting question is what do people know that programmers do not? Lots (important stuff, too).

05/15/2014 -- The indolence suggested by the comment, and that it had a bunch of agree'rs, suggests something. Firstly, though, we have to consider the lords of old and their jokers, in this regard. Lords had their middle men, to boot, who drove the serfs. What have we now? Programmers (and other ilk spawning off software systems) driving the lives, and minds, of the populace (on paths to perdition). What gave them the right? Have you thought about it (Google, et al)? Going further, mindless (even when cloaked as being thoughtful) propagation of wonders, via the cloud or otherwise, by software has deleterious side-effects (actually, insidious results). What are the measures of this? Let me tell you, in my time, okay? It will not be who has the biggest pockets from improperly (yes) obtained bucks. ... To be brief, if the true costs of systems were known, and accounted for, we would not have the big pockets as the costs would eat up those supposed gains. Actually, the metaphor of our infrastructure (what is it? 60,000 or more bridges are about to crap out? --- WTF?) applies since the software industry has spawned off crap now for decades (except for a few pockets of diligence and real accomplishment). ... Is it like the collection of deficits the handling of which is being pushed out to future generations? Some say karma. ... The valley of silicon has generated all sorts of negatives, in this sense; let's talk those (rationally and calmly).

Example of the coddled: Facebook's collection might provide a few that we could analyze.


Young men act out, see Businessweek. Talk about a juxtaposition. The opposite of the coddled. ... This old guy will have a lot to say about that.

05/31/2014 -- Rifts from code? Well, that has been there from the beginning. Can we have some sort of commonweal? For what? To be discussed.