Laser-like focus leaves out a whole lot of information

This post will be brief with only two concepts thrown out. The purpose for casting out these ideas is to raise the discussion level, if that is possible.

You see, data-driven and computational methods are insidiously entrapping us. Say what? Yes, unfortunately, those in the monied state want this of us.

So, we can use eye glasses as an example here. Notice how most are running around with narrow bands of glass that are supposed to do several things, I suppose. Now, whether this expectation works in general is something for study. But, it doesn't work on this guy (who has been four-eyed since childhood and who prefers a wider span of vision - you never know what you might miss).

Now, the more narrow the glass, the smarter the person? Isn't that the message of some ads? Or, does the narrowed frame indicate some notion of minimalism (which would be acceptable if done in a zen sense, rather than posturing)? One can ask several other questions. Is it vanity alone, with the eye glass and frame drawing attention to the eyes?

We could consider that the slightest of eye wear indicates some type of focus, as in concentration (which, incidentally, is one attribute of the best and brightest - oh, by the way, you knew that I would get back to that class, right?). And, isn't that [focus] expected with the growing emphasis on [an underdetermined] physicality? Now, that is all fine and dandy (as some used to say), except does life as a whole have to be subjected thusly (like we're all under the microscope - thanks, big daddy data)? 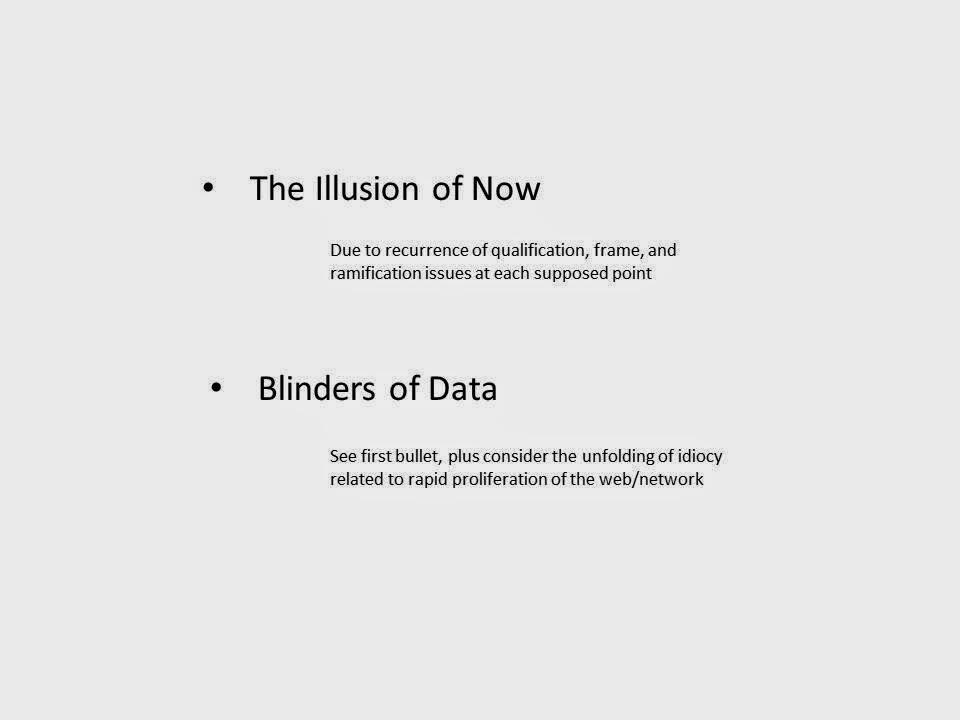 The concepts: the Illusion of Now and the Blinders of Data.

Antithetical to a whole lot of dogma? True. Stupid? Not by any necessity that you will be able to demonstrate. Perhaps, of bitter taste to those who think rich is smart and who want to enslave mankind? Well, why any other motivation?

... Again, a younger set has led us astray (I have seen many of these cycles) without knowing (said this way to acknowledge, at least, that intents were, may have been, worthy - except, chasing after money always leads to turmoil for the rest -- near zero, folks) since there are insufficient ways to improve their comprehension (heck, the older generation, time and again, bows - in some cases, they fill their pockets, too). ... We now have going on a quarter century of experience, so it's time to step back and to consider what the heck has happened here and there, ...,