This may seem like a punt (perhaps, too insider of a joke), but it is not. Since the blog started, the world has changed (quite a bit); the blogger has definitely changed. But, the topics of 7'oops7? No, they are really eternal, albeit with a conceptual label that is of the time.

There are two things to this post. Firstly, the image shows what topics were of interest, in terms of the posts read using today's state. Compare this with the snap done in December, 2013. There is enough data for this type of look back to be interesting. Too, such will come into play was we rewrite some of those posts using the current viewpoint (that is, considering all of what has happened, say, like with the Fiction-in-Finance area).

When we consider some of the changes, one deals with more computational overlays over our lives. Many of these are insidious, for a number of reasons, however we do not, yet, have the means to differentiate the good from the bad. It will be a matter of science and analysis.

Speaking of analysis, one pall is just that, namely the sort of thing where our little drippings are assumed, in total, to represent ourselves (big daddy data's problem, for instance). Too, all sorts of mathematical approaches are being applied, seemingly willy-nilly, since the results seem to make sense. There we have issues like mean convergence, et al, to discuss. In short, being is never subsume by any collection, however large, of data about us.

An interesting discussion can be found at Rick's blog, where he asks if the SAT could be replaced by big data. That is, that we make the decision to not use sit-down tests where there may be more information that is more useful. You see, some test well; many do not. Are the good test takers in possession of superior abilities for being success? It can go the other way: can someone who is trapped within a depressed environment test their way out of the morass?

This snap is from a post on March 18, 2014. Enough is snapped in order to set the context. For instance, are their creativity issues related to honing a test-taking mindset? 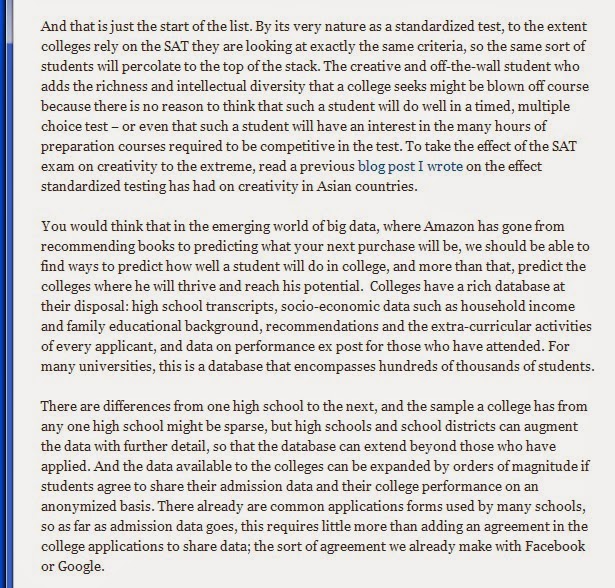 But, note the reference to Amazon (second paragraph) going from recommending some choice to their customer to where they think that they can predict. My first reaction is that they cannot do this with me as I have not bought anything via Amazon. Could they use data from other places where I have bought things and tweak my interest? Maybe. Perhaps not, though.

I can say that I have not responded to any ads over all of these years where I purchased anything on-line as the result of an ad. My purchases are the typical thing of researching and then buying (say, electronic equipment).

But, ought they? Let me make a statement here that the question encompasses a whole lot of stuff, including morality. Yes, that is true even though the Amazon owner might defer from such discussions. One of our thrusts will be to argue that point, from several sides. So, consider that one of the changes in the viewpoint of the blogger.

Too, though, we will be more technical (see another SAT, Logic/Probability, ... from truth engineering). Timeliness? Again, just as morality looks at atemporal issues, so, too, must our ruminations about things of oops and 'oops.

So, the title matches that of the other blog.