As a prelude, let me say that I have heard of Common Core but did not pay attention. Too, I have been seeing all sorts of oops; however, any of the well known are so multi-faceted that it boggles the mind trying to figure out where to start. 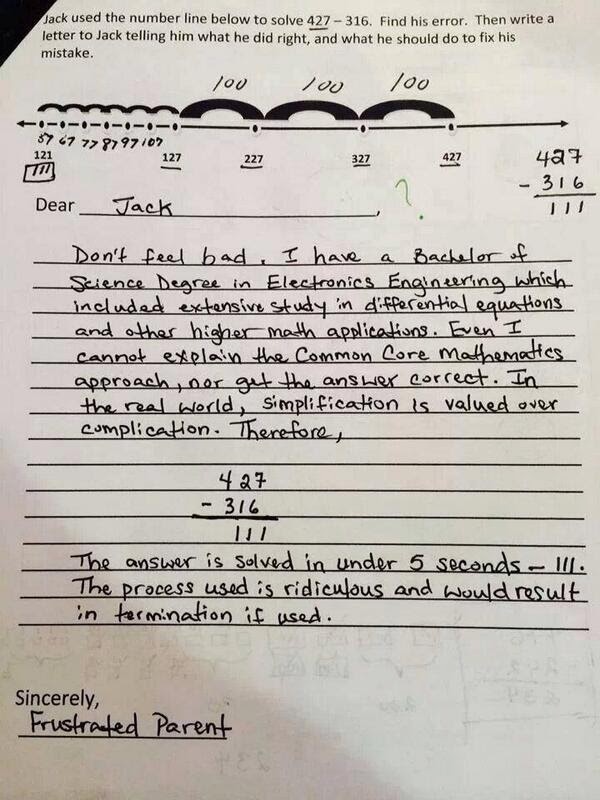 The Federalists Papers helped me a little. The image is from their site and supposedly shows a homework assignment to which a father responded. The Federalist Papers said that the father's response was awesome.

It looks like the photo started in Twitter (Ell_mari78) with 438 re-Tweets (as of today). That is where the Federalist Papers (School sends home) picked it up and pushed it to Facebook. There were responses/comments posted on all three sites: Twitter (19), FP (129), FB (48 with 244 shares).

I wrote a few responses (in the following order). All of these are a continuation of discussions in this blog and at the truth engineering site. It's nice that Common Core might offer some material to further the theme using a technical subject.

My first reaction was that this an example of mathematics being misused. As in, teach someone a little of the subject, and they become dangerous (like the bosses of quants). The approach is tedious and not really intuitive. But, as the second reaction shows, the thing is not as bad as it appears, albeit it's flaky (as in, more complicated than necessary). Finally, the push behind this type of initiative is to teach and assess the effect of teaching.

That there seems to be a bias toward the more formal approaches is troubling. But, we have gone over that a lot. Mathematics is not our God send. Rather, if one looks at the troubles of the world that are economic, a lot of the mess comes from world-class idiots abusing mathematics and the enabling computational system.

So, thanks Common Core. I'll have to catch up on what they're up to before proceeding.

03/27/2014 -- Based upon other examples that I've seen (say, friendly numbers), this whole thing aligns with my complaints about the misuse of mathematics. It has not been shown that mathematics is the way of truth (despite its operational successes), necessarily. As we know, numbers can be manipulated via interpretation (that is the human lot). To impose on young minds, the methods, etc., of elders, in the case of rules of thumb, is onerous. We need to bring out the "universals" to teach. Let the youngsters then discover their own approaches. What? Yes, look, mathematics came up with path independence in one area. There is a generalization of this. If the student gets the right answer, and the teacher cannot follow their thinking, blame the teacher (ala Galois' story).