Recently, a guy was sent to a customer's house by Sealy in response to a photo showing a point measurement (using a tape measure) of a depression of almost 3" in a new Stearns and Foster mattress. Ostensibly, it was a 'firm' mattress. After only a few days of use, this firm mattress started to sink as if it were the most soft, and plush, of mattresses. 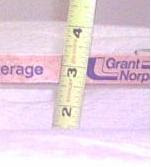 The guy arrived with his tools. One of these was a string with weights on each end. Okay, that is a good way to show dents in the interior because you can stretch the string across the mattress and differences are then obvious. The other tool was a 'jig' that was about 8"x4"x4" (approximately - the Sealy customer (Sc) did not think to measure the tool -what? question the motives and expertise of Sealy?). As well, this jig had markings up to 1 1/2" (this was not verified, either).

As the guy was setting up to measure, the Sc told him of the soft spots in the bed. He wanted to know if the Sealy guy would lie down on both sides of the mattress and notice the difference. Would this not be a good test? No, this is the not the method to measure, the Sealy guy said. The approach is to stretch the string across the mattress and then measure with the jig along the string. This type of measurement was done from several angles.

The result? The highest number was just shy of the 1 1/2" marking. To me, that would be reasonably close to showing a problem, but it is not good enough for Sealy. As well, the jig was averaging across the area and not doing a point measurement. Why? Well, the Sealy guy says that he was instructed to use this method because doing the point measure, which he did do in the past, pointed out too many failures. Oh? Sealy, tsk, tsk!!!!

The Sc palpitated the mattress which showed that there was a large soft spot. Not good enough, says the Sealy guy, since he cannot verify that the Sc was not being over exuberant in the one area in order to show that it was soft.

My question is, why cannot there be a pressure measurement? Look, Sealy, let me tell you how this can be done. But, first, let's look at some issues.

Lesson one is that Sealy's method emphasizes cosmetics. You know, form over function? Prettiness over effectiveness (would be better to use efficacy)? Now, did Stearns and Foster engineer the bed so that it would spring-back enough to meet their measure yet not provide the proper support for the sleeper's back? Is this a case of buyer beware?

Another lesson is that Sealy must think that the buying public is too stupid to recognize this sleight-of-hand. The jig is almost laughable, but it does keep Sealy from having to accept that a mattress is bad.

So, let's talk a new method. This is a mere sketch; we'll follow up with numbers later. We can keep the first tool, that is, the string. The jig? Let's replace it with a 3x5 card. Then, we could do a measure along the 3" side and the 5" side. The measure would be at various points.

Now, consider someone who is about 120 lbs. The pressure on the mattress will be spread along the body, but the hips would be a higher pressure point. We could assume that a 10 lb test is sufficient to represent this, though it may actually be way too low.

Like the Sealy guy, we'll run the string, apply the weight, and do the measures next to the string. How many places?

If we include the soft area and an area that is functioning correctly, and include a few more areas, the numbers ought to be significant. We do not have to, but will at some point, take it to statistical significance if the difference is large enough.

Now, Sealy, that is an example of a functional test.

These numbers will be collected sometime soon.

It would be interesting to know how many people have had this sham of an evaluation and are stuck with a bad mattress. How is it that Sealy can sell this mattress as firm when it obviously is not?

03/15/2011 -- Status, the store will replace the mattress. They, essentially, were waiting for Sealy to step up to its responsibility which never happened. Further measurements coming.

02/23/2011 -- Sounds stupid. A new mattress shimmed in order for it to function. Is that symbolic of the economic mess brought on by these big guys, like Sealy, et al? The consumer is left with weighing relative characteristics of crap.

02/22/2011 -- One may ask how the Sealy customer fairs with such a poor mattress. How can one sleep? With folded towels and sheets under two sets of mattress pads which fill in the holes somewhat sufficiently, for now. Yes, quite a contraption and contrivance to use for what is not a cheap mattress set.

02/15/2011 -- One example of pressure-oriented measurement and results thereof.

02/09/2011 -- A pointer to this post was put on Sealy's Facebook page as a Note. The Note is gone. Gosh, any meaning there? Sometime, in the near future, I'll follow up with the functional test results.

02/09/2011 -- Sealy's response letter contained this verbiage (the emphasis is Sealy's):
Oh, yes, Sealy. Firstly, this is a FIRM mattress, yet it collapses on one side when someone puts their body there. Oh, function does not apply in evaluation, at all, from your viewpoint? Ought a FIRM mattress behave like the most plush of the plush? This 'softness' was noticeable after only two weeks of use. Secondly, I can show you a 30-year old Sealy mattress that has been regularly rotated and flipped. It is still fully functional, provides a perfect sleeping platform, shows no impressions, and does not have any defect that would suggest that it could not go another 30 years. Thirdly, as said above, your measurement scheme is biased in your favor not the favor of your customers. But, the real issue is how this state of affairs came about that this customer is just waved off as a nuisance. Fourthly, how much engineering effort goes into ensuring that your mattresses can pass your biased 1.5" test? And, impressions? I spend a lot of time in hotels. If I got a room where the mattress had impressions, I would ask to move. Fifthly, assuming that a Sc could cover 'impressions' with bedding, in this case, the bedding is quite concave in that area after a person has been on the mattress for awhile. Plus, the bedding does not overcome the 'softness' (think, sinking into a hole) that prevents a comfortable sleep.