As we watch the markets bounce (volatility is up) around, some might think that it's possible to get a handle on this thing. Why?

Well, there are long periods with little volatility in which the trend has usually been up. Yet, not always, as we can have sideways movement. The chart covers 70 years of the DOW. 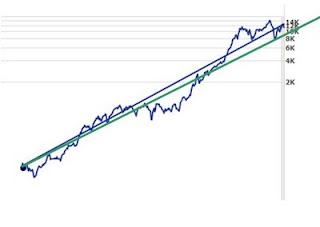 The blue line is the overall trend line from 1939 to yesterday. As such, it has little variability due to assumptions (note, accounting is full of special rules and assumptions that then imply choices -- it's not mathematics, folks), since it is a mere straight-line fit (however, all the largess of late is very visible).

Now, those with a certain view like this line. In fact, viewpoints that talk a 30K DOW use this line as their basis for argument. This viewpoint might argue that it has a lot of history behind it, but, as well, we need to consider what has happened the past 30 years that has influenced the rise (inflation, general economic growth, foreign investors, ..., largess).

In fact, we have a whole generation or two of financial planners who believe this line. Look at the FED's goals. They love equity, even though their moves sack the savers and those who are retired (QEs, low rate, other bits of largess - will they ever end?).

Now, consider the green line. It is as if weighting out extraneous issues, such as those related to the recent bubbles, would allow for a better fit. What it shows is that we ought to be hovering around 9K or so. How could that be?

One fact is that it would not be easy to see this happen given all of the loose money floating around. Or, to where would the money go?

One means for control is suspect from the beginning. Remember all of the arguments about accounting and special rules that you heard a couple of years ago? One of the more controversial (but correct) rules was relaxed, by order of Congress; hence, the surge of the DOW the past couple of years. Add to that the largess of the FED as a big factor.

Well, a recent report talks about an even worse problem (Pentagon can't put their thumb on trillions). The truth is that no one can do an accurate accounting (to be discussed) of any of these financial things in our modern, complex economic world. It's about time that we recognized that and took the proper action.

There are several things involved. Just like some European countries are restricting use of 'short' positions, we need to put a damper on derivatives, except for a playground where we can let these 'children' play to their hearts content.

Warren may call these things WMD, but he's making money on them, too. Warren, my challenge to you would be to put you money where your mouth is. Help me show how this whole bunch of supposed advanced techniques are bad, will always be, and need serious control. Too, take the vow of no derivatives (or only those of a type that can be shown to have necessity).

Analog: taking the vow of not being an idiot and texting (or anything of that ilk) while driving.

Secondly, we need to stop the markets every day and take an accounting. How would this look? Well, anyone know? I propose that we look at it seriously. You know, it'll go against the grain as the big money wants their 'black pools' and other questionable tools.

Thirdly, we will tame the stochastic beasts rather than en-flame them in an attempt for non-chaotic progress.

The goal is a sustainable economy. Too, moderation of the ca-pital-sino. All of this bears, and will get, more attention.

Finally, why pick on accounting as this problem is larger than that discipline? Well, you guys and gals, have you not been implicated in every bit of mischief that has come down the pike? Or, at least, has not one of your kind been involved?

Has there been a successful establishment of ethical practices? If so, let me know where I can see this. From where I sit, computation has just increased the avenues toward perdition. This is outside of your domain? True. Hey, IEs! What are you doing in this regard?