The original post was dated June 10, 2008. Gosh, over 6 1/2 years ago. Since then, financial discussions have mostly been under the context of FEDaerated (fiat money) in a continuing fashion as problem abound. And, we all of rational mind are waiting for the bubble to burst. The FED's roles dealing with fiat money have exacerbated the problems as seen from the reality of the street (as in, Main and others not called Wall). 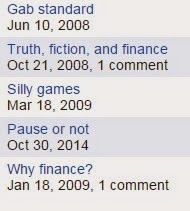 One problem is that there is a chimera that comes about, in part, due to charades. Yes, Wall likes to make sure that the game is in their favor. And, a good example of that type of thing could be the dark pools and like ilk. There are others (and, if we could lift the skirt or open the kimono, we would see many, many more).

I noticed, today, that some of the older posts are being read - see the image - which could indicate several things. All of these were from back before the spurt of mania that came from the FED's largess. And, that spurt mainly is equity oriented; savers have been flayed to an inch of their lives (how much longer can they hold on?).

Be that as it may, no one seems to be pushing a normative view. Why? So, we intend to do that. One approach will be to pick up these old posts and bring them up to date. That, of course, will take work and time. But, then, we have already said that we're under no time constraint.

The original post looked at the concept of stable money. You know, figuring that out is not easy. In fact, some approach, such as bitcoin, might be the solution. However, it would be a generally adopted scheme and not privately owned (ah, lots to discuss there).

Now, for a real gas, one of the WSJ articles was talking about the weak dollar. What we know has happened, of late, is that the dollar is strengthening, perhaps too much. One thing for sure is that manipulations like done with the FED's type of operations are oriented to the benefit of the country doing the machinations. Others have to react as best they can.

What kind of strategy is that (asking normatively, okay?) for a sustainable economy?

Before quitting, notice that another of the posts is "Silly games" and refer to the dark pools above. Then, "Why finance?" mentions leeches; yes, still very much apropos.