The WSJ (week of 5/11/09) had an article about this subject that referenced academic work by Thomas Philippon (New York University) and Ariell Resheff (University of Virginia). The WSJ touted the "long bull market for wall street pay." Using graphs from Philippon and Resheff, the WSJ article mapped events related to regulatory and deregulatory legislation to the timeline.

So, let's go to the source which is a paper titled "Wages and Human Capital in the U.S. Financial Industry: 1909-2006" and which was submitted to the Journal of Finance. Two figures from the paper tell a lot.

Figure 10: Actual and Benchmark Relative Wages in the Financial Industry 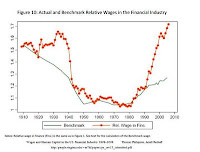 In this Figure, we see that there is a drop in 1940 accompanied the Investment Advisors and Investment Company Acts. Then, there was a long period where the money guys were paid like the rest of us stiffs. But, notice the upshot of the finance pay after the relaxations of 1980 after which we saw bunches of supposedly creative methods come into play that mainly lined certain pockets but extracted oodles from countless pockets of the hapless.

An earlier Figure in the paper compared the pay of the financiers and engineers. Needless to say, those of the latter set, who do real work and cope with real problems, lags behind the ego-stroking pay given those with big egos and not much else. It's interesting that there were fewer finance graduates which could be used to explain the pay gap; yet, comparative superiority of the engineering education over the financial can be easily argued. The latter is heavily influenced by quasi-empirical issues (though, they have not awakened to this, as of yet).

In his post on the Stern blog, Philippon asks "Are Bankers Over-Paid?" and concludes that they are; Philippon says about 40% too much pay in 2006.

08/01/2013 -- Ben cannot unwind or taper down; he has too many Doves. We'll have to get back to the king thing (yes, the divine rights of the CEO, new royalty, in other words) and dampening of these types by a new outlook (Magna-Carta'ísh).

Now, this can be used to illustrate how the game it to fill the pockets of a small set to an exorbitant amount. Does the game need to be that way? Hell no. We'll look at that some more.

07/17/2009 -- China has eaten our lunch (and dinner). Shows how silly our games are. Yet, finance can be run by people who can be non-profit in scope and who have an impeccable (oh, what quaintness!) un-interest in money.