Thanks to the ACM, a recent review article about Algorithmic Trading (AT) is available for public reading and is very much worth the effort. AT is the overall computational framework that includes High-Frequency Trading (HFT) and more. The thing to note is the large presences, as in a large percentage of the trades being done with these things (talk about out of control and running amok). The article is about technology and does not go into why these things are allowed (to rake in money by compounding the chimera?). 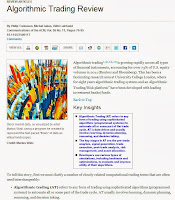 From the beginning, the authors (Philip Treleaven, Michal Galas, and Vidhi Lalchand) stress the lack of information about these approaches spawned by the financial engineers and the need for further research. From this overview, one can see how premature the push has been for financial engineering to get these things out for daily use. The authors remind us that just two failures had $1T consequences. Granted, in one case, the markets recovered the loss. In the other case, though, a company had to eat a big loss (as opposed to golden sacks who got their losses forgiven, as in, trades backed out after the fact - those on the other side of the trades lost what they thought were gains).

Moral: Consider, would you fly if there were huge unknowns that had not been handled? Are you familiar with the very low incident rate for modern aircraft? In fact, we went several years without a major crash. We put ourselves on plane daily due to our belief in the safety of the system (safety, as in the absence of gamers playing russian roulette with our economic lives).

Why the moral? Well, this blog started with a view to process required to present a new airliner to the market. And, we saw the amount of time and effort that was expended in getting the plane through manufacturing, testing, and such.

The finance folks? As you can see from the review, they have this little bit of testing that they do. What they are doing is running amok with our economy. How can this be?

For the past five years, I have been bewailing the gaming basis that has evolved for markets and that has been made much worse by the computer. For one thing, not many know computers, in the sense of the mathematics and software used by AT. That allows those who make the money to argue the necessity.

But, let this old guy tell you, these people are playing with fire in our house. It is true that many have made oodles, but, in a real sense, the gains are ill-begotten.

We talked to getting technical before, perhaps the time has arrived. So, thanks, ACM for making this review article available.

For one thing, we'll have to address a sandbox. But, the whole foundational framework needs attention, too.

12/19/2013 -- Ben did his parting shot (whimper that it was); they're going to taper slowly, less than a 1/3 on the bond buy, starting next month. And, he's going to torture savers for another year or so. We'll have to see how the pieces fall. The markets got heavily seeded today in hopes of luring in the idiots and moms/pops (who cannot afford the pending losses). So, it's pop, fizz, ..., again. Too, we'll see more goo-goo talk to the immature markets and the addicted investors thereof. One of many technical issues that we'll have to get into: Nanex's view.

01/15/2015 -- At last, a series that will establish the basis and extensions, as required. We are going to go back to some simple and come forward to the modern, complicated economy. Why? My long chain of ancestors (inherited via Prof. Lucio Arteaga) is one motivation.